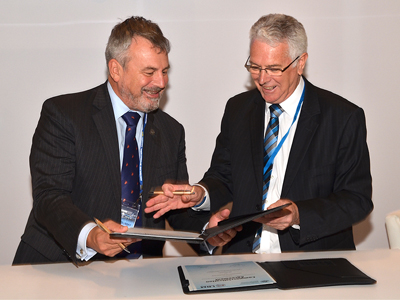 Minister for Defence Industry the Honourable Christopher Pyne MP, has announced a breakthrough system for imaging stress in aircraft structures has been licensed to Victorian company LRM Technologies.

“The company will be responsible for worldwide marketing of the innovative thermoelastic stress analysis system developed by the Defence Science and Technology Group for monitoring the structural health of airframes,” Minister Pyne said.

High performance aircraft are exposed to severe stresses, which need to be understood and controlled to reduce high ongoing maintenance costs and avoid catastrophic failure.

“This system is a significant advance in the stress measurement and diagnosis of airframe performance,” Minister Pyne said.

“LRM Technologies bring more than 20 years of experience in marketing infrared camera products and systems to the commercialisation of this Defence innovation,” Minister Pyne said.

“This is a win-win situation with industry commercially exploiting an innovative Defence technology for a wider market.”

The Microbolometer Thermoelastic Evaluation Technology can also be used for detecting manufacturing defects and monitoring fatigue cracks in civil and maritime infrastructure. It has been successfully trialled on full-scale Joint Strike Fighter fatigue tests in the USA and UK.